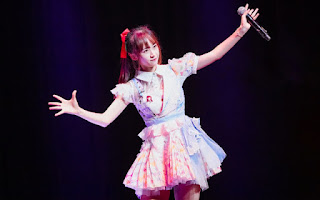 Qiao Yuzhen through her live Pocket48 broadcast today revealed a number of things about her group CKG48.

She divulged some things related to the rules of the group from Chongqing.

Some things revealed by Qiao Yuzhen answered the fans' curiosity regarding the status of CKG48 as SNH48's sister group.

CKG48 is an SNH48 sister group based in Chongqing, China.

This group was disbanded last January and has now been reborn as a new group three months after disbanding.

Even so, CKG48 doesn't get as many facilities as SNH48 sister groups like BEJ48 and GNZ48.

"The regulations are still the same as the central (management) office." Yuzhen explained in the live broadcast.

She also explained that members were not allowed to bring beauty and accessories during the performance.

However, according to Qiao Yuzhen's information, CKG48 is now more stringent.

"Messages sent by STF or companies must be answered immediately," she said.

This includes the salaries of CKG48 members who incidentally are IDOLS Ft.

If SNH48, BEJ48, and GNZ48 are allowed to dye their hair, this time it is different that CKG48 will forbid its members from doing that.

But that did not make CKG48 members give up on these different conditions and regulations.

Just for information that CKG48 does not get an official account on Pocket48, even the account of its members is labeled IDFT.

CKG48 is also not allowed to edit anything on Weibo.

This is evidenced by their Weibo appearance which is still related to the 2018 election, and may only be allowed to post it.

Not included in general elections or other large annual events.

For example the sixth election yesterday, no CKG48 members participated at all.