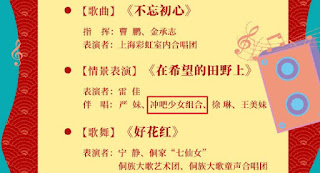 AKB48 Team SH for the first time appeared in a festival on one of the Chinese TV stations namely CCTV.

This TV station is indeed known for its very high sense of nationalism.

Anything that does not speak Mandarin or has no Pinyin letters (Chinese characters) will be changed by this TV.

The name of AKB48 Team SH itself is not written and does not speak Mandarin.

This name was taken from their third single 'Shoujotachiyo' and means 'Rush Girls Group'.

Surely this name has been approved by AKB48 Team SH.

Some idol groups in China that do not have Mandarin names are forced to set names.

They also usually sing the nationalist songs that have been provided. It also seems like the AKB48 Team SH song shouldn't be sung because it contains Japanese thing.