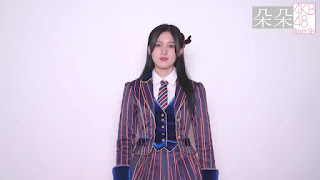 The demonstration case that occurred in Hong Kong has not yet been resolved.

The demonstrators refused and opposed the Chinese government policies.

Many of Chinese people support all kinds of Chinese government policies for a strong one country Mainland China which includes China, Taiwan, Macau and Hong Kong.

After yesterday's GNZ48 terminate a contract with a Japanese beverage company that supporting the demonstrators, this time the AKB48 sister group in Shanghai 'AKB48 Team SH' showed rejection of the Hong Kong action.

Wang Yuduo is a member of the AKB48 Team SH scheduled to appear in the NBA China.

But AKB48 Team SH issued a strong statement that they would withdraw their members from appearing at the event because it was proven to support Hong Kong demonstrators.

All members of the AKB48 SH Team group love our homeland and adhere to one Chinese principle from beginning to end.

With a determination to protect China's sovereignty and full territories, we will definitively oppose any speeches or actions that disturb the country's unity.

AKB48 Team SH member Wang Yuduo will not attend the NBA night scheduled for NBA tournament. We would like to express our sincere apologies to the fans who wish for this event, and thank you for your understanding and support.


The AKB48 Team SH's action won praise from many fans who supported the Chinese government.

This caused controversy among the people.