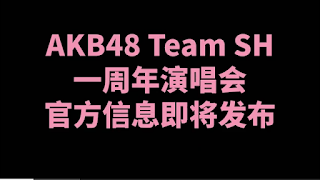 AKB48 Team SH has announced that they will hold a concert for their first birthday celebration.

This was conveyed through the official Weibo account yesterday.

For your information, AKB48 Team SH officially made their first performance on October 26, 2018 during the 2018 AIF event.

The first anniversary celebration concert will be held on November 23, 2019 at Wandai Nanmeng, Shanghai, China.

This concert will be attended by all members of AKB48 Team SH consisting of the first and second generation.