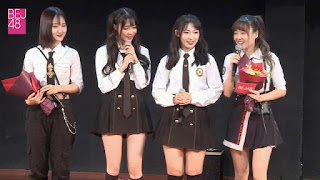 The performance of the BEJ48 Team B theater 'B A Fighter' tonight was marked by an announcement from the captain.

The captain announced that 2 new members would join the formation of the Beijing group's first team.

These two members are from the 7th generation.

The names of the surnames (the front) are both very rare indeed in the SNH48 GROUP.

Both officially became members of Team B right then.

In the future they will be the theater girl for Team B's performance.

Their profile is already on the official BEJ48 website. Their official Weibo account will also be launched soon.