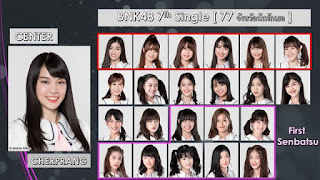 Seen in the picture there are 23 senbatsu members.

The account also confirms that BNK48's seventh single is not a Gingham Check.

He also explained the composition of the dance formation but could not find which AKB48 Group single yet.

In addition, the Chulabhorn Wanaram Temple Facebook page also revealed that the 7th MV single was filmed yesterday in the area of ​​the temple which is famous for its bamboo.

However the truth will be delivered by management this October. Guess the title of the 7th BNK48 single?