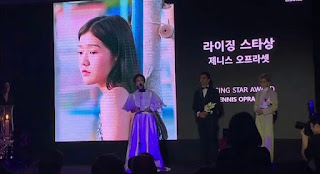 Jennis accompanied by Music from BNK48 Films was invited to the 2019 Busan International Film Festival in South Korea.

Both were present because the film, starring both 'Where We Belong', was included in the film's chosen lineup.

Not only came, one of them, Jennis, received an award.

Jennis received an award from the 2019 Marie Claire Awards.

The BNK48 Team BIII member was awarded the Rising Star.

Jennis' acting in the film Where We Belong is indeed very interesting.