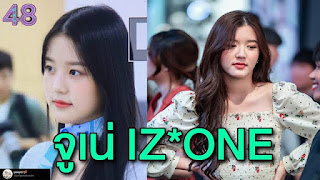 A BNK48 fan account on Facebook '48 GAG 'some time ago uploaded a photo of a second generation member named Juné.

The photo was edited and juxtaposed with one of the PRODUCE 48 'IZ*ONE' girlband dropout members, Jang Wonyoung.

Interestingly from the photo, both of them look very similar in face.

Fans also gave comments on the similarity of the two.

They seem to have something in common in the upper lip.

"From this angle they look similar," wrote the account named Natanit. "Very similar," said the netizen who used the Thai name. "Which is the real one? I can't see it, help me," wrote the Rose Apple account.

It is proven by this visual that she was able to become the winner of the PRODUCE 48 survival event. Juné BNK48 is also very popular as proven by her collaboration with GDH to play a series.