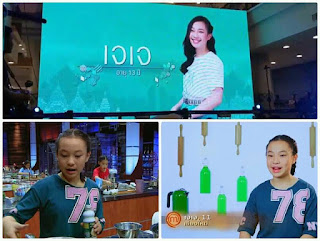 After being introduced yesterday, the first generation of CGM48 members began to be the subject of discussion on social media.

Fans began searching for traces of the members' pasts before joining the group from Chiang Mai.

Like JJae CGM48, members from Chiang Mai also participated in the discussion at Pantip Thailand forum.

She became the topic because she is a former child chef who turned into an idol as a teenager.

JJae is a contestant for the first season of Junior Master Chef Thailand, which aired in 2018.

When participating on Junior Masterchef, she was 11 years old.

"It seems that Khun Khae Kitchen has a competitor," wrote a netizen.

Khun Khae Kitchen is a cooking event from Kaimook BNK48 where she will invite other members to cook cakes and more.