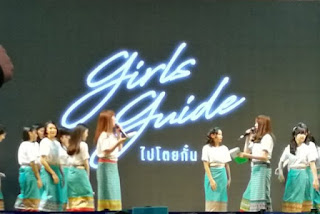 In the We Talk To You by Shihanin and Captain on October 26, Aom and Izurina announced the first generation CGM48 members.

In addition, there were several announcements made by these two seniors.

One of the things that was announced was the first TV program owned by CGM48.

The inaugural program of CGM48 is a traveling or traveling program titled 'Girls Guide'.

In Thai, the program has the name Pai Duy Gan (ไป โต ย กั๋ น) which means 'let's go together'.

But, the broadcast time of this program has not been delivered and will be announced in the future.

It is likely that CGM48 will introduce several tourist attractions in northern Thailand or Chiang Mai and surrounding areas.

The province of Chiang Mai is indeed famous for its nature which is often visited by local and foreign tourists.