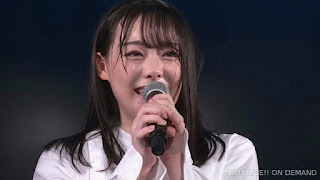 At a student theater performance training or AKB48 kenkyuusei titled 'Pajama Drive',bSato Shiori announced her graduation from the group.

Shiori said she would say goodbye from the group to fans who watched the show that day.

In her announcement Shato Shiori said that her dream of becoming an AKB48 member came true, she had no further goals.

Meanwhile she has found a new destination and wants to study abroad.

The graduation ceremony will be held on November 27 at the AKB48 Theater.

Her last handshake event will be held on November 23, 2019. Sato Shiori is a third generation member of the AKB48 Group audition draft, she was chosen by Team A at the audition.