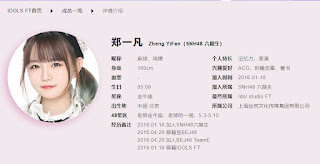 Another member of IDOLS Ft finally returned to SNH48 GROUP.

Zheng Yifan, the girl from Beijing, finally returned to her original group BEJ48.

She rejoined the Team E formation which now needs members because many decide to leave.

Zheng Yifan was demoted to IDOLS Ft in January 2019 during the SNH48 GROUP major reshuffle.

The decline in membership status is due to her hiatus from late 2018.

Finally, after almost a year, Zheng Yifan was determined to become active again in September 2019.

She was welcomed well by fans for this return.