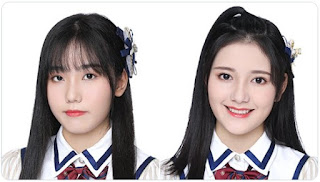 Ma Xinyue is from Shanxi while Liu Guo is from Sichuan.

These two members are quite tall, their height is more than 170 cm.

Ma Xinyue or Yueyue was born on February 19 (Pisces) and Liu Guo or Guoguo was born on December 15 (Sagittarius).

They are temporarily still in (Wei Ru Lie Chengyuan 未 入 列 成员) the term for members who have not entered the team in GNZ48 with Wu Siqi.

This Guangzhou-based group no longer uses the trainee system because there is IDOLS Ft. In the future they will enter the team formation after receiving promotion.