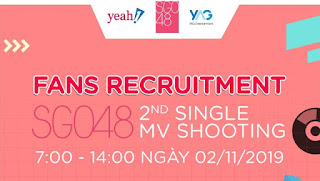 SGO48 has just released a surprising announcement for its fans last night on its official Facebook account.

They announced that they would recruit fans to filming SGO48's second single music video.

Surely this is encouraging news for fans of this Vietnamese idol group.

SGO48 will announce the detailed location of the joint location via e-mail if the fans are selected, which is certainly in Ho Chih Minh City.

This is a rare opportunity for fans to be able to contribute to MV.

The MV filming with fans in AKB48 Group took place in only a few songs.

The AKB48 song, whose MV was performed with fans, is Koisuru Fortune Cookie and Kokoro no Placard.

However, only MV Koi Suru Fortune Cookie whose scene also invited fans of JKT48, BNK48, and MNL48 to shoot together.

Is SGO48's second single Koi Suru Fortune Cookie. Fans can register at the link provided by SGO48 on their official Facebook page. Registration deadline is 31 October 2019.