SNH48 Group concert tour in Tokyo has been cancelled 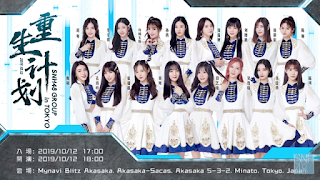 SNH48 decided to cancel their appearance in Tokyo Japan which will be held on October 12, 2019.

This was announced in their official Weibo account today Suddenly because it had been less than two days, the management and organizer in Japan had considered this carefully.

The reason for this cancellation is the climatic conditions that will hit Japan on the day of the performance later.

Regarding Tokyo Tour SNH48 which will be held on 12 October.

Due to the impact of the typhoon "Hagibis" in Japan, we apologize that we will cancel the "Plansalvation" Japan Tour SNH48 GROUP scheduled for October 12 in Tokyo and all other activities.

According to estimates by the meteorological department, typhoon number 19 this year "Hagibis" will land in Japan in the next two days, and is very likely to have a large impact in Tokyo.

As the strongest storm in the Northwest Pacific since this year, Hagibis's destructive power cannot be underestimated.

To protect all members and staff participating in the tour, and to ensure the safety of fans in Japan and abroad, we have confirmed with Japanese organizers and emergency channels, as well as other large-scale cities in Tokyo.

For fans who have already purchased a ticket, we will arrange for everyone to return the ticket after communicating with each ticket channel.

Ticket details will be announced later on the official SNH48 website.


This decision is indeed hard and difficult for fans to accept.

However, this was done for the sake of the safety of SNH48 GROUP members and fans who were about to watch.

SNH48 has also sold out tickets for the Plan Salvation show.

Though later they will release Japanese songs for the first time.