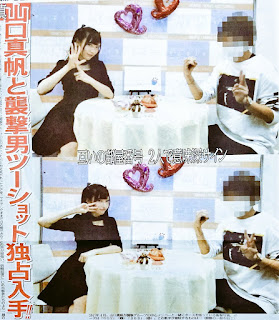 Sponichi Newspaper made a shocking news about the Mahohon case, which was about "evidence" of Mahohon's relationship with fans (perpetrators), 2 photos of Mahohon and fans in a 2-show event that supposedly indicated its room number.

Yamaguchi Maho deny it via Tweet, and fans who know what 2shoot event is must understand that poses during 2shoot are indeed requested by fans and members may not understand what they mean.

Sponichi basically created speculations over Maho and the attacker's 2shot from shamekai whom they perceived to have established a close relationship. The two of them posed "602" which allegedly is the number of Maho's room number.

Mahohon says: "I don't want to be involved anymore but Sponichi-san's defamation is serious, so let me say something. As you may know, fans will request a pose on shamekai. As I looked at the camera, I hardly know what the other people were posing." 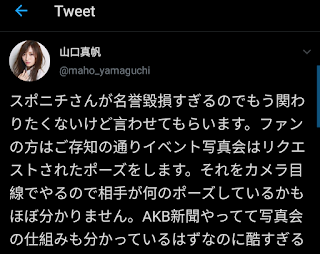 AKS through the media and its lawyers, will certainly do anything to protect their assets (NGT48, member).

Likewise, the defendant attorney who sued fans of AKS for material damages, will definitely protect its client.

Now, mistakes are thrown back to Mahohon.

The Mahohon case seems to be directed that Mahohon is the one who is at fault, at least she lied or fabricated stories about the connections of members and fans that led to her case. Or at the very least, there isn't enough evidence about member connections with fans, like on previous reports.