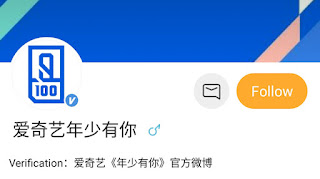 But apparently this excellent Chinese program has changed its name again.

With its similarity to the concept of PRODUCE 101 in Korea, this event received a lot of blasphemy from net citizens.

However, the boy band from this show NINE PERCENT successfully debuted.

Success in China, iQiyi once again presented the IDOL PRODUCER event but they changed their name.

Qing Chun You Ni (青春 有 你) is the name for the second season of the event.

UNINE boyband from the second program was also a huge success.

In the upcoming second season of Qing Chun You Ni, iQiyi changed from the type of participant to male to female for the first time.

Group names such as SNH48, LadyBees, S.I.N.G will reportedly participate.

But the third season program of this type of producer idol event was renamed.

On this day, iQiyi registered a new Weibo name for the third program of the survival event.

Not Qing Chun You Ni, the Weibo account has a new name called Nian Shao You Ni (年少 有 你). This event is likely to begin later this year.