Who will chasing Shani in JKT48 Senbatsu Sousenkyo 2019? 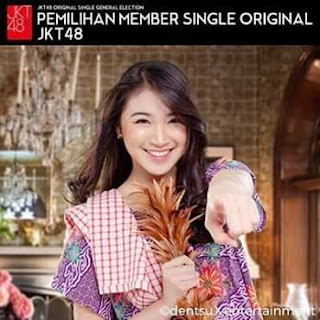 At the moment, voting for an event that can easily be called the JKT48-style election has entered the vote.

On Saturday at the SMESCO Convention Hall, the announcement of the 32 major votes was announced by JKT48 management.

Followed by Jinan Safa Safira from Team T with 7,010 votes, and Feni Fitriyanti (Team J) 6,375 votes in the top three.

Vying for votes at this year's grand JKT48 event, especially for the senbatsu or 1-16 positions, should be even more exciting.

Because, many popular members who got senbatsu position last year, have graduated.

Shani, who finished second with 47,654 votes last year, had a great chance to repeat success in 2017.

In the 2017 Sousenkyo, Shani is the champions.

Moreover, the capital at the announcement of the first phase was good, Shani's votes was twice as much as Jinan, who was second.

The numbers obtained by Shani now are not only a benchmark for the achievement of Team KIII members and fans.

More than that, 15 thousand votes collected in the first stage can be psychological numbers that must be pursued by other members if you want to enter the senbatsu team.

Reflecting on the previous Senbatsu Sousenkyo statistics, the acquisition of members in position 16 is indeed not far from 15 thousand votes.

In 2018, for example, Gabryela Marcelina (Aby), who was a representative of the Academy Class A, collected 13,587 votes. Not that bad for a kenkyuusei member.

So, who can chase Shani to secure that psychological number? The answer is in the efforts of the members and their fans.

To be sure, Jinan, Feni, Diani Amalia, as well as Aby who pinched in the top five did not want to rush to throw a towel.

Jinan, for example, wants to improve its position from last year which finished at number 14.

It is the same in second place.

After that, her ranking continued to decline.

Jinan doesn't want to be thrown away anymore.

’My target can now be seen by many people. I want to be in front. I want when people see JKT48, they will immediately see me. Without having to search first. So, my tagline on senbatsu sousenkyo right now is #DimanaJinan (Where is Jinan).' she stressed.

She knew, the acquisition of her voice is currently two times lagging behind Shani.

Jinan is confident and trusting its fans to be able to gather more votes.

’’My fans are the determinant. We are like teams, each of which has a role. I have shown and given my business to them. Now, those who will support me.'' explained the Team T member.

Feni Fitriyanti is the same way.

Being in third place was not her expectation even though she did not expect the announcement while the first stage was in good order.

She said, there was still a long way to go until the voting closed on November 27th.

She was determined to keep trying so she can get a better position from now on.

For this reason, Feni claimed to have prepared a strategy.

However, she was reluctant to share information for that. To be sure, she wants to realize the campaign tagline that she carried namely #More.

"Last year was 4th position. Maybe if I really was the year, the target is more than that," she said.

Does being the center of Team J provide its own advantages to attract more fans? Feni has another view.

According to her, not an advantage because being a center puts greater pressure on her than last year.

Her achievements in the senbatsu sousenkyo also had an impact on the team's pride in her.

"I don't want to disappoint my own family," said Feni excitedly.

Another Team J member, Diani Amalia Ramadhani is also ready to continue stepping on the sky even though the achievement is said to be very high.

Understandably, in the 2017 Senbatsu Sousenkyo, Diani's name is not in the top 32.

This good moment will certainly not be wasted.

"Whatever the results will be, hopefully our process does not stop here and will last until the end of the announcement later," she explained.

Diani claimed not to be a typical girl who is easily satisfied.

She positioned as people who always want to try hard to get what they want.

Her open attitude towards input and criticism has so far succeeded in making her a strong member.

’’The current position, to be honest, I never thought I'd be ranked fourth. Indeed this is a good position, but I also should not be easily complacent with the temporary ranking. The process to reach the final ranking is still long. I want to continue the process for myself and my fans." she said.

Is Diani going to be the dark horse in the senbatsu sousenkyo this time?

Her fans can prove that.

To be sure, if Diani made it to the senbatsu team, she promised to study Japanese.

In addition, she will improve performance, and MC in the theater so that more people laugh.

The 18 year old member also wants to finish better than 2018.

Shani, Jinan, Fenin, and Diani are members with better votes than her.

However, Aby was not in a position to refer to the four members as the toughest rivals.

According to her, the toughest competitor is herself.

"I should be able to show that I am worthy to be in the best position of senbatsu sousenkyo this year," she explained.

Aby believes her fans can bring her to a better position this year.

Moreover, the reward for the 2019 competition was the original single which made all members want to bring it.

Still Not an Easy Competition Shani's vote was so high, coupled with the graduation of the members that each senbatsu sousenkyo edition had a high voice did not make her careless.

According to Shani, there will never be an easy road in this competition period.

Every year, according to her, there are always challenges.

’I consider this year's sousenkyo to be very serious and need more determination. What is championed is the original single. Which all this has been waiting for, '' Shani said.

The Team KIII Member added, the presence of new members is also a challenge. "They have a high young spirit, attract attention, and also talented. ’’

"I also always remind myself and supporters to always be enthusiastic to the end. There's still a long way to go, '" she added.

When asked how optimistic, Shani said the same as the enthusiasm of his supporters.

However, she did not want to expect too high. Shesaid, she wanted to enjoy the trip during the senbatsu sousenkyo with enjoy and with all her strength.

''Target? I just pray that I will be given the best position. Position in accordance with the effort that I have done, '' she said then smiled.

There is something to be said that Shani and fans will not be playing games on the senbatsu sousenkyo this year. She said, since the announcement last year that made herlose her back to back chance of winning, supporters tried to support him even more.

’’I can really feel their change and enthusiasm that is much better than before. Including various projects carried out by fans with the Bring Back Storia tagline. Even since the beginning of 2019, Shani has not seen any fan enthusiasm go down." She explained.