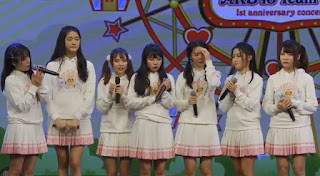 In addition to theater and setlist, there are other important announcements including promotion of core members from 2nd generation.

Those who were promoted from 2nd generation are 6 of them namely Gui ChuChu, Gong LuWen, Hu XinYin, Shi AiBei, Xiong FangNi, and Zeng SiChun.

This promotion is fast because only two months ago the second generation was announced to fans at the Shoujotachi single special fan meeting yo !.

In total there are still 15 second generation members who still have to struggle to be appointed as core members of the AKB48 Team SH.

2nd gen at the concert last night also appeared on several songs, one of which was Heavy Rotation.

They wear the same uniform as seniors in the first generation.