JKT48 9th generation members to be unveiled, as they prepare for 10th gen 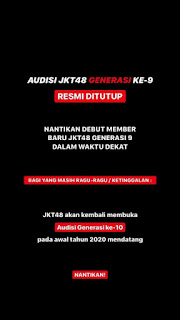 Official JKT48 through Insta Story announced that the JKT48 9th generation audition has been closed.

The audition began several months ago and has now officially closed.

The 9th generation members will debut in the near future but it is not yet known when they will debut as Academy Class B.

According to the rumors circulating they will be introduced at the Graduation Concert, there is also a mention that Gen 9 will debut when HS is in Surabaya or Jakarta.

This immediately makes fans confused because they have to choose their favorite member back in gen 9 and also the more new members, the more new faces in JKT48, people only know a few pioneers like Melody, Nabilah, Haruka, Veranda, but now the dynasty will soon be replaced by a new dynasty.

With the Re:boost system, JKT48 is ready to build a new dynasty with the new faces of the successor girl JKT48 success stick.

In addition to announcing that the 9th generation audition was officially closed, JOT also announced that early next year (2020) auditions will be held again for the 10th generation.

There is no official info on when the auditions will be held, but we'll wait.

Currently JKT48 has 66 active members & 9 members who will be graduating at the end of this November. And later when Gen 9 officially debuts, the number will increase.