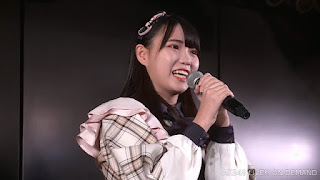 She is Onoue Mizuki who represents Nagasaki prefecture.

Her profile on the Team 8 website and also AKB48 has been installed.

At the performance yesterday, Mizuki appeared as zenza girl singing the opening song of the repertoire titled Hoshizora wo Kimi ni.

Onoue admitted that she would prepare the best in the theater performances of AKB48 and other activities.