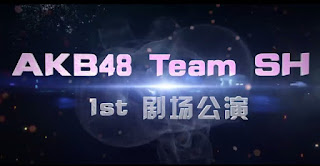 One of the great announcements at AKB48 Team SH's anniversary celebration last night was the presentation of a theater venue in Shanghai.

After being officially 1 year old, AKB48 Team SH as AKB48's sister group in China will begin their theater performance.

The location of the AKB48 Team SH theater will be in the Shanghai Yangtze Theater / Changjiang Theater (上海 长江 剧院).

This is a temporary theater alias not permanent or rented because it does not belong to the group itself.

Their first setlist is titled "Thumbnail" or in its mandarin "Suo Luetu (缩略图)".

One of the songs in this setlist was performed by AKB48 Team SH in the concert, Coin Toss.

Theater performances will begin in February 2020. The songs that will be awaited in this setlist are Kimi wa Melody and Kuchibiru ni be My baby, the mandarin version.