AKB48 Team SH gets criticized for "Oshibe to Meshibe" display 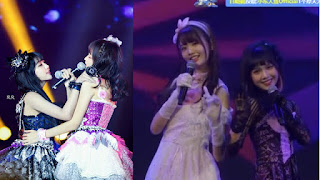 In this concert there were lots of new songs like "Bokutachi wa Tatakawanai" which greatly entertained their fans.

One of the new songs performed by AKB48 Team SH members in the unit section is "Oshibe to Meshibe to Yoru no Chouchou".

The song was performed beautifully by Liu Nian and Zhu Ling.

But apparently their appearance both reaped scathing comments from SNH48 fans.

As we know, SNH48 has adapted the song "Oshibe to Meshibe to Yoru no Chouchou" since they was part of the sister group AKB48 back then.

The song was adapted by SNH48 into Chinese with the title "Ye Die (夜 蝶) / Night Butterfly".

This song is very popular with fans and often even enters SNH48 Request Time shows.

Hearing AKB48 Team SH performed this song was something that made the Chinese fans curious, including SNH48 fans. Here are some scathing comments after the video of AKB48 Team SH's appearance uploaded to the Weibo social media.

"To be honest, I still like the name of the translation song of the butterfly night (SNH version). Now if this song tastes additional to Mary Sue. Then the high difference between my sisters (SNH members) is also very pleasant," wrote a fan.

"Even though Li Yitong turned away, but I think the night butterfly outfit (SNH version) was more very beautiful.", The fans' appeal to the SNH48 version was uniform.

"The lyrics are not good, they better sing the Japanese version (AKB48)." write account @ YXxxxxx.

"What are the lyrics tra*h? There is no artistic at all".

"Do they sing in Japanese?"

"I don't understand the lyrics, I think they sang in Japanese until I heard de youxi lyrics".

"Sounds very unsatisfactory ... And these lyrics are emmmm".

"I just realized that Siba (STAR48) is very good at composing lyrics".

"The night butterfly (SNH version) which has been imitated, but can never be surpassed".

"The lyrics of the night butterfly are hard to match ...".

"Copying can never be exceeded ".

Most comments are in terms of lyrics and imitation.

If it should really adapt AKB48, maybe Team SH could use the title "Xiongri, Churi, h-e Ye Di'e (雄蕊 ， 雌蕊 和 夜 蝴蝶)" which is closer to "Stamens, Pistils, and Night Butterflies".