AKB48 Team TP concert "Are You Ready for TP Again?" 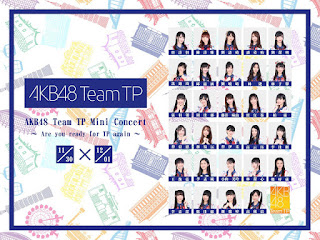 After AKB48 successfully held a concert in Taipei, this time it was the turn of the sister group AKB48 Team TP who would hold a mini concert.

Through the announcement on the site and social media AKB48 Team TP, they will hold a mini concert for two days, 30 November and 1 December 2019.

The concert will be held at the Huashan 1914 Cultural and Creative Industry Park venue, Wumei Theater, Zhengzhou District, Taipei City.

Members will be divided in half in this concert according to schedule and those on hiatus and suspended will not follow.

This is Team TP's second mini concert, previously a concert celebrating the group's first anniversary. This concert is also the first without Abe Maria who graduated last month.