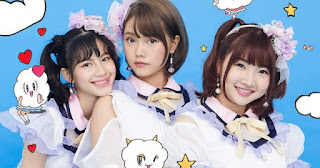 BNK48 sub unit "Mimigumo" will hold its first fan meeting with the title "Mimigumo no Himitsu" or "The Secret of Mimigumo".

This event was first announced at the BNK48 theater performance yesterday.

This fan meeting will be held on 22 and 21 December 2019 at the KBank Siam Pic-Ganesha Hall (Siam Square One).

The event will start at 14:00 local time for two days of implementation.

Although it is not mentioned in the picture, when it was announced at a theater performance it appeared that it had been announced that ticket sales would open on the 23rd of November.

The event will be attended by three sub unit members namely Music, Jaa, and Kaimook.

Mimigumo is the first sub unit of BNK48 which consists of 3 people from the first generation.