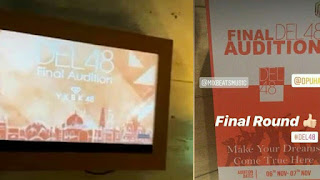 As DEL48 informed some time ago that the audition of the first generation members of the final round will be held this November.

Sure enough, this final stage audition has officially ended.

Not announced to the public, DEL48 chose to do this audition secretly.

The final stage of the DEL48 audition has been revealed by several unknown Instagram users.

It appears from the insta story the account owner uploaded a photo of one corner of the room used for the audition.

In the banner photo at the audition location, the final round was held for two days, 6-7 Nobember 2019.

Reportedly also DEL48 had finished and decided the candidates were elected.

The rumor is there are 15 members of the first generation DEL48. These girls will be announced soon by DEL48 which may be done at a press conference.