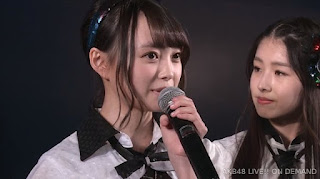 After Ota Nao Team 8 announced to graduate yesterday, it is now Hiwatashi Yui's turn from AKB48 Team B today.

This was announced by Yui Hiwatashi in the Team B performance titled 'Theater no Megami' tonight.

Hiwatashi Yui admitted that it was difficult to balance studies with idol activities at AKB48.

That reason is indeed a very frequent thing so that the heaviest decision to graduate becomes the end.

For the future after graduation, Yui wants to do TV-related work in the future.

According to Yui, to achieve this, she still needs to try hard.

Even so, Yui said that she enjoyed the life of her idol as a member of AKB48.

Although she had been on hiatus, she had experienced being a senbatsu.

Her last handshake event will take place on November 23, 2019 and her last theater performance will be held on November 28, 2019.