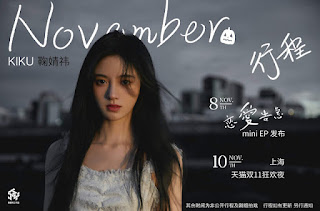 A few days ago, Ju Jingyi Personal Studio through its official Weibo account announced that they would launch a mini EP aka the latest single for Ju Jingyi.

In English, Lian'ai Gaoji has the meaning 'Hunted Love'.

This single is also a celebration of Ju Jingyi's six-year debut as an idol.

In 2013, she officially passed the SNH48 second generation audition.