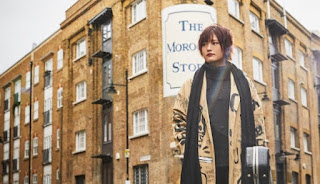 Her third album will be released precisely on Christmas this year 2019.

According to Sayanee, the name of the album wanted to convey the meaning of "story" and "first time".

The proper title to represent is "α (alpha)" which is the Greek alphabet Means it's "Beginning" or "Top".

In this album besides the songs from the three previous singles such as Unreachable, To-ge, and Tsuioku no Hikari, there are 3 new songs featuring quality artists and songwriters who sit on the chair of music producers.

The song True Blue was produced by Ohki Nobuo from ACIDMAN.

One more song is Larimar from Tomi Yo, the songwriter who has created many famous artists including AIMYON, and Suda Masaki.

Album cover, and album poster pictures were taken in the City of London, England.

Yamamoto Sayaka also announced the Acoustic Mini Live & Talk event specifically for those who bought the album "α" to be randomly selected 2,400 lucky winners will participate in the event.

This album will be released in three types namely Regular, Limited, and FC Limited.

Each with a different cover photo.