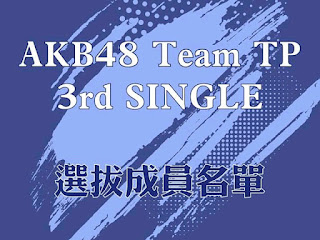 On the official Facebook AKB48 Team TP it has been announced that they will release their latest single, the third single titled "Yuuhi wo Miteiruka?" (In Mandarin: Kanjian Shiyangle ma? (看見夕陽了嗎？)".

This really surprised the fans because the group had just released their second single in July 2019.

The gap between the second and third singles is quite long about 4 months they just released a new single.

The announcement of senbatau members already be carried out live through broadcast on the Lang Live (浪 Live) AKB48 Team TP Official account on November 25, 2019 at 19:30 Taipei time.

This third single will be the first single without Kaigai member Abe Maria who officially graduated a few months ago.

Which mean senbatsu line up will be filled by the original member AKB48 Team TP. Here are those 16 members:

This is the first time in the history of Yuuhi wo Miteiru ka, senbatsu members numbered 16 members (not including during concerts / events).

Yuuhi wo Miteiruka the mandarin version has been featured by AKB48 Team SH in their first anniversary concert last weekend. So the lyrics are known to the public and fans. Maybe the curiosity is focused on the coupling song later.