Empty seats at SNH48 Theater, what has happened? 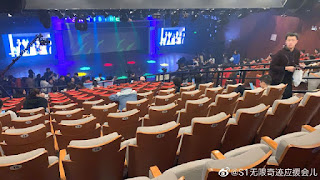 According to an account of an idol gossip account on Weibo, at 19:00 Chinese time at which the show was about to start, the audience seats looked very empty like the picture above.

The show that night was a show from Team NII with the setlist "Shi zhi Juan (时 之 卷)".

The condition of the audience seats is very quiet than usual when previously it was always crowded and full or at least 50% filled.

Hearing this unusual news we tried asking fans of SNH48.

We tried to ask one of the SNH48 GROUP hardliners on Weibo.

When we asked about this, he confirmed it was true.

"That is normal now," the man answered.

He also explained why the theater lately was very quiet and even GNZ48 experienced the same thing on that day.

"SNH48 needs a new breakthrough, their theater is less popular this year, only old fans are coming," exclaimed this fan.

According to him also, almost 80% of Chinese female idol groups disbanded in 2019.

This is a difficult condition for 7-year-old idol groups like SNH48 to survive.

He also said the theater would be full of only a few shows such as seitansai, festival celebrations, national holidays, and popular members participating.

Before disbanding, SHY48 and CKG48 experienced the same thing.

Central management was even forced to dissolve these two groups. The private theater of the two groups is no longer used anymore.