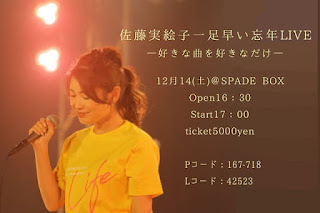 She announced it herself on her SNS account on October 30, 2019.

Unfortunately, this will also be her last concert as a solo singer.

This concert will be held at the Spade Box, Sakae, Nagoya, Japan.

These concert tickets have been officially sold now.

In this concert Sato Mieko will say that there will be piano, acoustic and other surprising new things.

Sato Mieko is a member of the first generation SKE48 group who debuted in 2008.

But before joining SKE48, she was indeed a singer who had released her singles and solo albums.