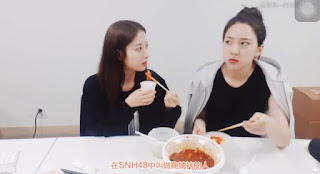 Ju Jingyi is now known to most of the people of South Korea thanks to the drama "Legend of Yunxi / Yunxi Cuan (芸 汐 传)" which he stars.

This drama had become a trending top three in Naver Korea to beat other dramas.

Legend of Yunxi's popularity is proven now because some time ago two members of the girl group Cosmic Girls talked about this drama.

Bona and Eunseo Cosmic Girls talked about the drama while they were enjoying eating on a live broadcast.

"She is that girl, right? What is the drama? Legend of Yunxi speaks Korean," Bona said while trying to talk to Eunseo.

"Do you know the girl?", Bona asked Eunso during the live broadcast.

"The person is Ju Jingyi, a member of girlgroup SNH48," Bona told Eunso.

This has made speculation that Ju Jingyi is already well-known among the people of Korea and even the classmates of Korean girl groups know that he is the one who starred in this drama.