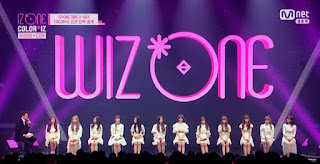 IZ*ONE are in the controversy over manipulation of votes by PD Ahn Joon Young.

The man who was responsible for the results of the PRODUCE 48 and PRODUCE X 101 events admitted that he had manipulated the votes from the final election of the two programs.

This also makes K-Netz angry with the behavior of the CJ E&M officials.

Now Ahn Joon Young has been arrested by the authorities for the falsification of these two PRODUCE survival events.

This certainly worries IZ*ONE fans because their favorite group is the result of PRODUCE 48.

WIZ*ONE claims that they will still love their favorite group.

Even now they show their loyalty to love this 12-member young girl group.

Some of them have stated that they will continue to love IZONE despite the controversy.

"IZ*ONE please stay positive when you receive negative comments! WIZONE will always be by your side, no matter what happens. You don't make mistakes on this issue, we love you very much, know that ️I became WIZ*ONE because IZ*ONE not because of PRODUCE 48 ", write Twitter user @ Mr_Wong114.

"Many WIZONES started to love IZONE not because of PRODUCE48 but IZ*ONE itself. I watched it (PD48) but at that time I was not WIZ*ONE. But after they debuted and did every show as IZ*ONE, it made I feel they are special & deserve to be loved ", says @qordid98.

"I'm in love with IZ*ONE, not PRODUCE48 and it will stay that way forever. That is, IZ*ONE has become a perfect group and their efforts are undeniable. They can't control the outcome of the vote, they just do their best and arrive - they are treated as if they don't deserve it, it hurts me ", writes @amir_zahar account.

"They are not one of the produce groups. They are IZONE. A WIZONE is not a fan of PRODUCE 48. We are fans because we love IZONE. They deserve all our love as WIZONE and in reality not all love in the world is enough to give them what they deserve ", wrote the account @ BELrey2002.

Today, Off The Record Entertainment made an official statement to various media.

They announced that the comeback showcase of the girl group IZONE for a new album titled "BLOOM*IZ" would come to be cancelled.

Previously, the showcase was scheduled to be held on 11 November.

However, the agency that houses IZONE did not provide a clear reason related to the cancellation of the showcase.

As quoted by Korean media such as SBS, expressing the controversy of votes manipulation committed by Mnet in the "PRODUCE 48" event is denied to be the most fundamental reason about this.

Though IZ*ONE has planned to comeback on November 11, 2019 in the showcase titled "Comeback: IZ*ONE BLOOM*IZ". Some time ago, members' individual video clips have also been uploaded on IZONE's SNS account.