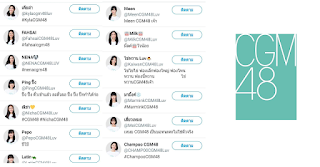 After being announced a few months ago, the members are now beginning to be known by fans through their daily lives on their official Facebook and Instagram accounts.

This news appeared after many account names of members CGM48 with the Twitter user name "(Name) CGM48Luv".

However, it has not been confirmed whether this is the official Twitter account of CGM48 or not.

But, BNK48 had promised to make a Twitter account for its members, but it hasn't been realized until now.