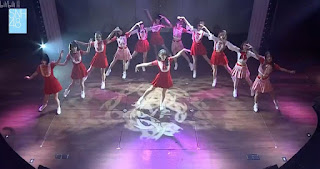 At the SNH48 Team HII theater performance last night, the birthday celebration of the captain Wan Lina was held.

In the performance titled Orange Miracle was also participated by several members of Team NII.

In this performance Wan Lina has the right to arrange the song or the type of performance she wants to offer to the audience.

She along with other members performed a dance cover of a song from South Korean girlgroup.

The song is none other than Violetta which is a single hits from a girlband dropout PRODUCE 48 "IZ*ONE".

Wan Lina also chose to bring it with 11 other members so that according to the formation of IZ*ONE itself which consisted of 12 members.

Although SNH48 is not part of the AKB48 Group anymore, this is called fans as their support for IZ*ONE which is being hit by the controversy over the issue of votes manipulation.

Even the SNH48 staff allowed the song IZ*ONE to be performed after an issue which caused the group to be banned from appearing on several shows.