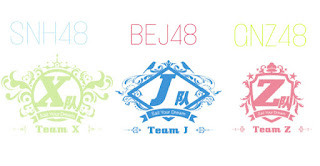 Previously, Team Z was rumored to be disbanded so that their fans would fight for votes so that the team could appear at Request Time in December.

But apparently this rumor did not only hit Team Z.

Teams in other sister groups were also hit by the news of the disperse.

The third team "Team J" is rumored to be missing from the SNH48 GROUP team.

In addition, SNH48 as the parent is also rumored to be losing the team, namely "Team X".

These rumors are so trusted by fans because lately the performances of the three groups have experienced shrinking.

However, there is also a lack of confidence in the rumors because Team Z has not yet started the original "Mia.Z" setlist.

Team X was once they were just about to hold a new setlist show "Yiwang de Gudu".

As we know from year to year, SNH48 GROUP lost many teams because it was disbanded.