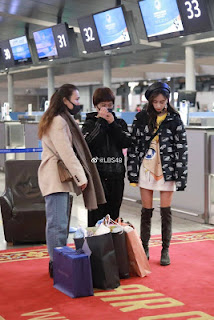 The news skewed hit one of the SNH48 Team NII member, Huang TingTing.

According to Chinese media, the girl is reportedly violating her agency contract STAR48.

From the information elsewhere, Huang Tingting looks out for a business activity with two people who are not her personal assistants.

Paparazzi photos of her and these two people were scattered on Weibo.

Fans did not recognize these two people so they thought they were from another agency staff.

This is the beginning of the problem that hit Huang TingTing.

These two people were considered to have a secret agreement with Kotete.

But the fans' suspicion of Huang Tingting violating the contract is false. It turned out that the two girls who were with her were still people of her agency. They have misunderstood responding to it.