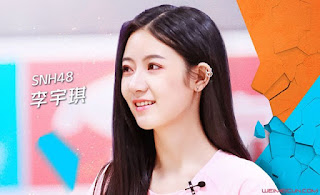 After the song she uploaded was viral, Li Yuqi apologized to everyone through her official Weibo account.

SNH48 girl are considered to have plagiarized Lafu Island Super Junior, who changed the lyrics into Mandarin by her.

"First of all, I'm apologise! I'm really sorry! That was my fault. I wasn't careful enough. I should have written the name of the original singer. Because I don't know how to get this," Li Yuqi said.

She also did not intend to do plagiarism.

"I'm sorry for my mistakes! But I never thought to make it commercial (selling songs). I don't know what fees to charge for this bill," she added.

Li Yuqi claimed that she sang this song on her birthday about seven or eight months ago, so she uploaded it.

She did not even think that the song Island from her could cause a lot of problems.

"This is indeed a bad influence caused by my brain. However, it is true that my copyright awareness is not good enough. But my fault, I know! Sorry again! There is one more. I also only knew this before I completed the test," she wrote when just found out about this problem.