SNH48 Qiu Xinyi made a shocking statement on Weibo 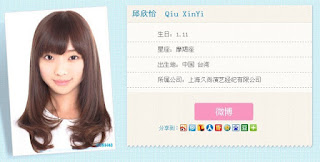 Qiu Xinyi SNH48 just made a fuss on Weibo over a statement written by her.

This statement made fans surprised because Qiu Xinyi wrote her heart about the future of the SNH48 pioneer, the first generation.

"I think the First Generation is really very bitter," wrote Qiu Xinyi on the official Weibo.

Not yet known the purpose of this Qiu Xinyi but this alludes to the careers of the first generation who have brought SNH48 forward for approximately 7 years.

"I must be expelled from the life center (dormitory) now. That problem helped me terminate the contract together. Very grateful.", says Qiu Xinyi in the comments column.

"It also helps me make psychological recovery and adjustment. If not, I really don't! Hope it means! By what! Please Siba to consciously cancel the contract automatically! Release the children.", The second comment written by the girl who often called Wanwan.

"The room doesn't exist, but I have to clean it and then return to the group. Then return for a few days across the hotel to stay. Can you live like that?" Wanwan continued in the comments.

Qiu Xinyi has not been in senbatsu nor been elected for a long time at the general election. She also rarely does theater performances because of her studies at Shanghai Theater Academy.