November is now almost half a month gone by, this is a sign that December will soon be met in the near future.

As usual there are special moments in December that can not be missed, namely Christmas and the end of 2019 to 2020.

As always every Christmas and new year moment will be welcomed by the idol group from Shanghai, SNH48.

Towards this moment, SNH48 and its sister group will usually hold special Christmas and New Year performances at the theater.

Not just a special performance, SNH48 will launch a new single with the theme Christmas and New Year.

SNH48's Christmas single has always been awaited because several times it was hits on the Chinese music charts.

Christmas single and new year 2019 SNH48 have been revealed. STAR48 has registered the singles' songs with the music copyright. 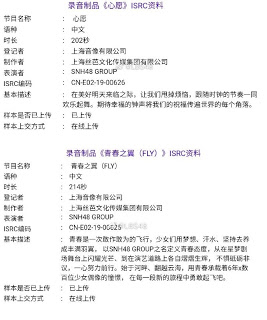 There are two songs listed by SNH48 namely Xinyuan (心愿) which means 'Hope' and the other is Qingchun zhi Yi (青春 之 翼) with the meaning 'Wings of Youth'.

It is likely that this single will be released in early December 2019. Senbatsu will also be taken from members of the sister groups BEJ48 and GNZ48.