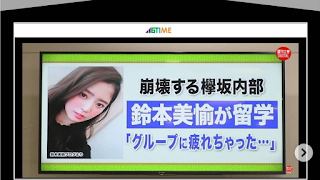 Based on Bunshun's interview, the reason Suzumoto studied abroad was because she was bored with group activities and decided to study abroad while changing her mood.

Suzumoto Miyu plans to return to Japan next year, and at the same time it is rumored she will announce graduation from the group.

When Bunshun asked about Suzumoto Miyu who was reportedly studying abroad, Suzumoto's mum said she could not talk much about this.

And when asked if the child was dissatisfied with the group's situation, Miyu's mum said her child loved the members and praised the kawaii of 2nd gen.

Bunshun also reported on the 9th single Keyakizaka46 which is scheduled to be released this winter, but the release date and title have not been announced even two months after the announcement of the members of Senbatsu which was done last September.

According to info, the recording process for the 9th single Keyakizaka46 had actually been completed, but Hirate did not like the results and had to be changed and re-recorded.

That is why information regarding the release of the 9th single has been postponed.