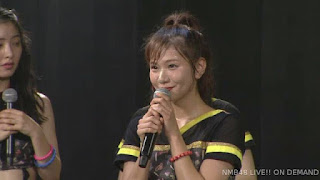 Airi became the second team member to decide to leave following Ota Yuuri who some time ago had announced to graduate earlier.

Tanigawa is a member of the second generation NMB48 that debuted in 2011.

"NMB48 became the first serious thing in my life, it made me grow very strong," Tanigawa told fans in her speech.

"I graduated from NMB48. What I learned here, I decided to leave NMB48 with a lot of experience and confidence," she said.

The girl from Osaka revealed that she would remain in the entertainment world after graduating from NMB48. Tanigawa Airi will have a graduation concert which will be held on December 19, 2019 at Zepp Namba.