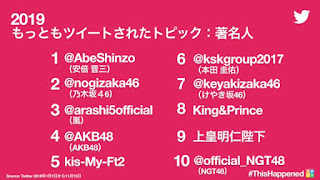 Our favorite idol group in Japan, AKB48 and its sister groups, are back on the hot list.

In the list of "Topics Most Tweeted (Category: Popular Accounts)", AKB48 entered as one of the top 10 accounts.

But still rival group Nogizaka46 is superior to the idol group AKB48 on this list.

Their sister group NGT48 also made it into this list.

As we know that this group has been widely discussed in Japan since the case of the former member Yamaguchi Maho.

AKB48 Group is also included in another list, "Topics Most Tweeted (Category: Singer)".

Besides that NGT48 for @ official_NGT48 also got 5th place. The former NGT48 Yamaguchi Maho also managed to get ranked 8th. NGT48 case with Yamaguchi Maho are also popular topics that are discussed abroad.