Nearing the end of the year is the time to do a flashback of what we have passed in the past 12 months.

One of Japan's biggest music media, Billboard Japan released the great lists related to music during 2019.

One such list is the best single sales category in Japan.

In this category, the number one best selling single in Japan in 2019 was won by AKB48 with "Sustainable". 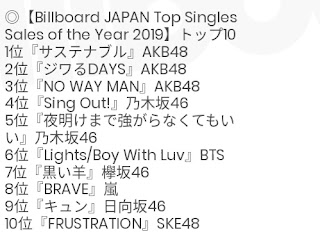 But apparently not only for the single Sustainable from AKB48 who are on this list.

In the number two best selling single this year is Jiwaru DAYS (AKB48).

AKB48 won all the top three positions with the single hit.

Their rival "Nogizaka46" and their sister groups also did not want to lose with the single.

Single "Sing Out!" and "Yoakemade Tsuyogaranakutemoii" succeeded in fourth and fifth place.

The single "Kuroi Hitsuji" from Keyakizaka46 also had the perch in the seventh position.

There is only one sister group in AKB48 on this list.

The newly released SKE48 single "FRUSTRATION" was unable to defeat Hinatazaka46 and was only at number 10.