A choreographer from AKB48, Takeshi Kise some time ago traveled to Delhi, India.

This can be seen from his Instagram account (@takashi_kise) where he uploaded photos taken while at the Jama Masjid, Delhi.

The good news, Takashi Kise through the instastory informed that he was back in Delhi, India on November 30, 2019.

He uploaded a photo showing that he was at Delhi's international airport. 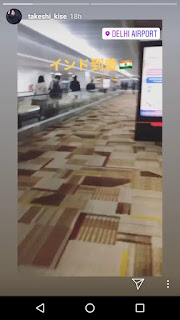 When TPE48 (now AKB48 Team TP) was formed, he was also tasked with educating members in Taipei.

After that, he was seen visiting BNK48 in Thailand and AKB48 Team SH in China.

His arrival in Delhi, India became the code that he helped train DEL48 generation members for their debut.

It is known that Firoz Khan is a choreographer appointed by DEL48. Is DEL48 debuting soon this December? Let's wait for this good news soon!