AKB48 Team SH has their own original Japanese, Mizuno Risa

The idol group from Shanghai "AKB48 Team SH" now has two generations, namely the results of the first and second auditions.

Now all of their members are 40 girls.

Until now, AKB48 Team SH does not yet have a kaigai member aka sent from AKB48 in Japan.

If BNK48 has the name Izuta Rina, Miori Ohkubo.

AKB48 Team SH also did not want to lose to their sister group.

AKB48 Team SH members already have one member from Japan from the second generation audition results.

Risa often goes back and forth from her hometown of Tokyo to Shanghai, China. 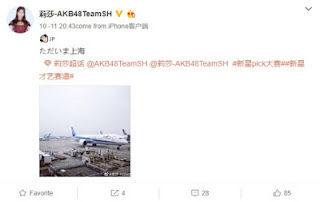 In her Weibo account she often uses two languages ​​namely Mandarin and Japanese.

She is also often uploads vlog videos and workout training videos to Weibo.

Seen in the video, Risa is still accustomed to speak Japanese, since she became a member of AKB48 Team SH she started learning Mandarin.