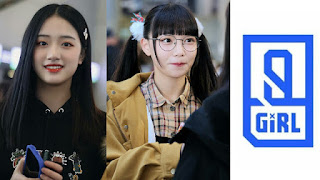 Trainees for Qing Chun You Ni 2 are now one by one heading to Guangzhou for filming.

Team SH sent two of its members to attend the Qing Chun You Ni 2.

They are Hu Xinyin and Shen Ying.

A few days ago, they were seen at the Shanghai international airport to depart for Guangzhou.

After appearing in the new year's event, both of them immediately departed on January 1, 2020 to Guangzhou.

Hu Xinyin is the most popular member of the second generation AKB48 Team SH.

She is also known to like Ju Jingyi, former SNH48, who is now in a solo career.

Shen Ying is a first generation member who is also popular in Thailand after attending the Asia Festival concert in Bangkok yesterday.

The two will meet their rivals at SNH48 GROUP who send more members of 10 people.