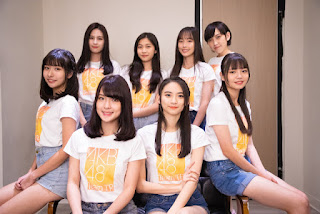 As we all know, the Taiwanese idol group AKB48 Team TP uses the names of core and kenkyuusei members.

However, this will not be valid from March 2020.

At the press conference and the debut single of Team TP today, it was announced that starting from March 2020 the group will implement a team system by forming 3 teams at once.

At the moment, the team's name cannot be published.

So to use the name Team will use the designations Team A, Team B, and Team C.

In addition to the announcement of the formation of the Team, AKB48 Team TP also announced the second generation of members.

An audition was held in the middle of this year and as a result there were 8 girls selected and joining the AKB48 TP Team.

That's the new 8 members AKB48 Team TP, based on the source there are actually 10 members who passed the audition.

However, only 8 signed the contract and became part of the AKB48 Team TP.