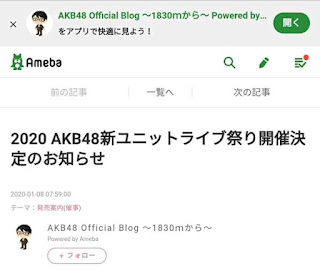 During the AKB48 Theater 14th Anniversary theater performance it was shown that the AKB48 members formed several units and performed group songs. The unit appeared from the beginning to the end of the show and this was the first time AKB48 appeared in several units during the Anniversary.

The units were formed during the 14th Anniversary of the AKB48 Theater and are divided into 8 Units with a variety of members joining. AKB48 through its official blog announced that the group will hold a Live Matsuri Unit on the upcoming February 22-28, 2020 at Shibuya Stream Hall.

The following are the details that will appear during the AKB48 Live Matsuri Unit:

That's the Unit that will appear on the AKB48 Live Matsuri Unit on February 22-28, 2020 at Shibuya Stream Hall.